Disaster Relief after Fire on Chenggong Street in Hualien City 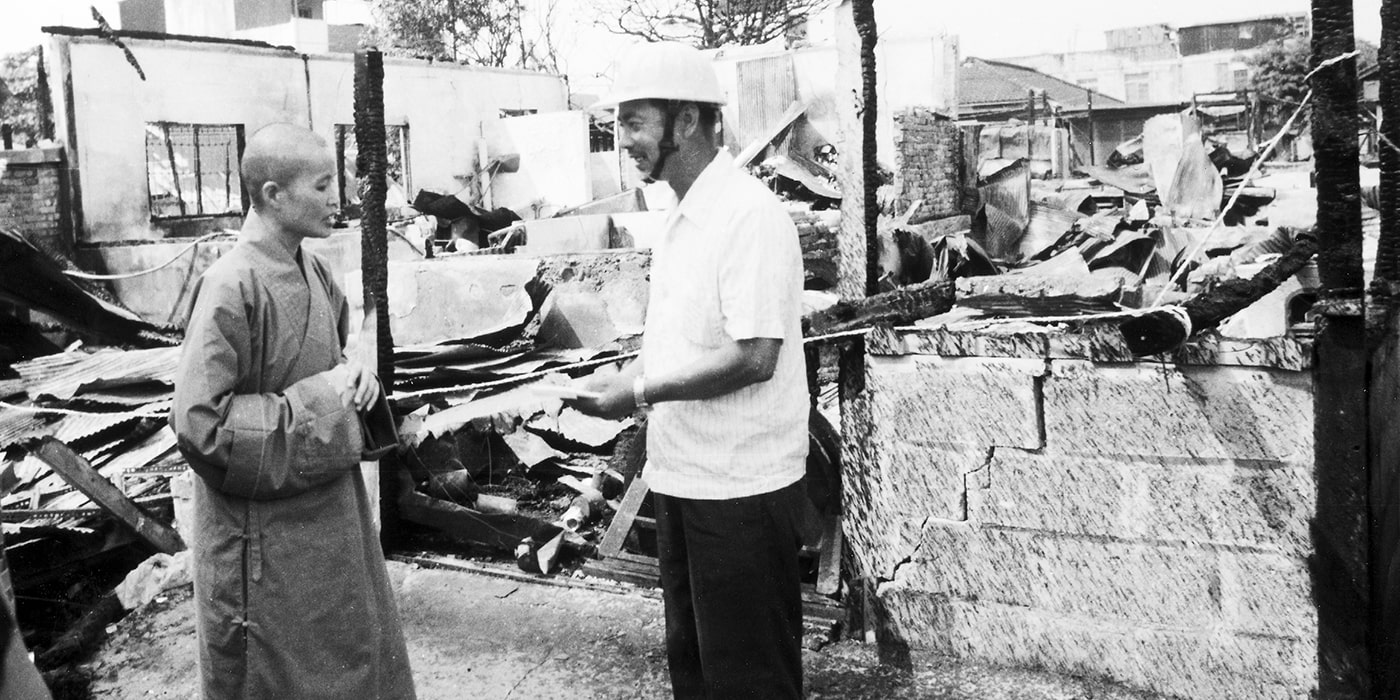 On November 27, there was a huge fire on Chenggong Street in Hualien City that spread to areas around Renai Street and Fujian Street. That same day, Master Cheng Yen, along with commissioners, went to offer comfort, as well as distribute emergency cash aid.

Seventy-two households were affected in the fire on Chenggong Street in Hualien City. Tzu Chi delivered emergency cash aid that was gathered out of the love and sincerity of thousands of people.

On November 27 at 10:10 p.m., a huge fire broke out on Chenggong Street in Hualien City, and it later spread to Renai Street and Fujian Street, burning until the morning of November 28. The fire destroyed forty-three buildings, and caused over seventy households with more than 300 people to become homeless. Losses from the fire exceeded NT$14 million Master Cheng Yen, as chairperson of the Tzu Chi Merit Association, and all of the commissioners heard about it and were deeply concerned. After a meeting, they decided to set aside several years’ worth of the association’s savings as a fund to conduct disaster relief.

All of the commissioners of the association decided that they would go to the disaster site in the area of Chenggong Street at 9 a.m. on December 6 to offer comfort, and that they would distribute emergency cash aid at the Third Unified Villages. Mr. Ke Wanjian would represent Master Cheng Yen in overseeing the distribution.

Although it was not a great amount of money, it had come from years of saving by the association, and it originated with the combined love and sincerity of thousands of people.

Whenever we distribute emergency cash aid, the association will also include a letter of comfort to the affected with the following message:

Life on this impure land is full of suffering. This is also the era of Dharma-degeneration. The collective karma of sentient beings has led to a world of disasters, which range from disasters of warfare, water, fire, wind, and so on. These calamities continue to occur daily; they are just fairly far from where we happen to be living and thus do not affect our own body and mind. Because of this, we overlook them and are not that concerned about them. However, once disasters befall us, who would not feel sad, hurt, or sorrowful? Some people even feel so much pain that they do not want to live anymore. This is human nature; we cannot place any blame on what we cannot see. In fact, we should know that disasters will continue to occur in this world without end. Our daily lives are also constantly surrounded by turmoil and change. Therefore, as the founder of Buddhism, Sakyamuni Buddha, very thoroughly predicted, “The world is impermanent like bubbles on water. We cannot take everything in this world too seriously. We should see our gains and losses that we encounter in this life as an illusion or like the morning dew, or a flash of lightning.” This is a true principle; life really is like a dream. It is illusory and dangerous, with impermanence quickly striking.

Having faced this disaster, I hope our hearts can remain calm. Disasters are a very common occurrence for people in this world. As long as our lives are safe and we can regularly create more blessings, we do not need to fear.

Buddhist Tzu Chi Merit Association has been established in Hualien for nearly five years. Over these years, we have had the trust and support of kind local people who have collected these donations to disaster relief and to help the poor. The city has sustained severe losses from this situation, and our association should put forth its utmost effort to help.

However, while our association has the utmost support and help of good people, the number of poor families continues to increase every month. Every month, the amount of our regular expenses is always close to our total revenue, so the foundation does not have much in the way of surplus funding. After rounds of discussions with the commissioners, it was decided that the association would distribute a large portion of the savings towards this emergency disaster relief effort at this time. Although it is not a large amount, this is what has been saved over the years and represents the loving hearts of thousands of people as well as our most sincere thoughts of collective comfort. We hope that you do not mind! May the Buddha’s compassionate light constantly shine on you, and may you soon rebuild your happy home.

We wish for the light of benevolence to shine everywhere, and for you to live with joy in body and mind!

On Chenggong Street, Renai Street, and Fujian Street (Zhuji and Zhuyi Villages) in Hualien City, a huge fire that occurred the evening of November 27 last year destroyed forty-three buildings, affecting over seventy households. On December 6, Tzu Chi went to the Third Unified Village to give out emergency disaster relief aid and letters of comfort. On the tenth day of the same month, the association distributed emergency cash aid to sixteen unregistered households, deeply touching disaster affectees with this act of kindness.

Although these sixteen households were not registered on file with the city, they were in fact residents of this area. The police department also worked with the city hall to verify their situation after the disaster. Following this verification, Tzu Chi Foundation distributed the emergency cash aid to them.