Repentance is a very important practice in Buddhism. In fact, all religions prescribe repentance. For Christians, to repent is to wash away one’s sins, while in Buddhism, practitioners engage in repentance during the morning and evening recitations in order to cleanse their minds. Throughout the history of Buddhism, repentance ceremonies have become more complex and elaborate. However, the Great Repentance that Master Cheng Yen speaks of simply directs us all to thoroughly cleanse our minds. This means no longer harboring afflictions in our hearts, nor treating others with anger. When we conceal our mistakes, there is a possibility that we will commit them again, but through open repentance, we can be cleansed of these past wrongs. As Master Cheng Yen explains, “Once we have repented, we are free of transgressions. If someone can recognize their faults and change, they are a good person. Thus, if someone commits a wrongdoing but knows to repent, we must all forgive that person and look after their will to practice.”

On April 17, 2003, Dharma Master Cheng Yen began teaching the Water Repentance in her Wisdom at Dawn lectures, spending five years and giving 535 lectures in total. She finished this lecture series on March 12, 2008. In those first years of the twenty-first century, Master Cheng Yen chose to lecture on the Water Repentance because of her keen observations and hopes for our time. The war- and starvation-filled twentieth century gave way to a new century, which brought with it a new flood of suffering and insecurity. SARS, avian flu, and other new forms of infectious diseases swept across the globe; acts of terror became more prevalent; and the threat of global warming became an imminent reality. According to Master Cheng Yen’s teachings, it is only when everyone sincerely repents that these calamities will abate. “At this moment, we need all of humanity to collectively practice Great Repentance. We must all turn over a new leaf and immediately eliminate the resentment, conflicts, anger, and hatred in our minds to awaken our pure and good intrinsic nature. Only by giving rise to this kind of reverence and treating each other kindly and gently can we truly eliminate these continual disasters.” 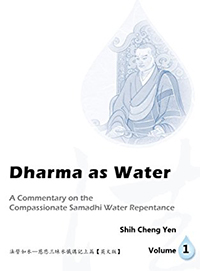 Dharma as Water: A Commentary on the Compassionate Samadhi Water Repentance Volume 1 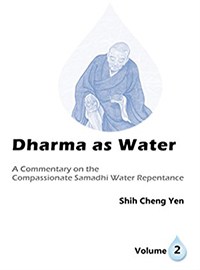 Dharma as Water: A Commentary on the Compassionate Samadhi Water Repentance Volume 2