This sutra describes the Buddha’s instructions to his disciples before he entered Parinirvana. When the Buddha entered Parinirvana, the disciples were to regard the precepts as their teachers. Moreover, they were also to distance themselves from anger, arrogance, and so on. He encouraged everyone to have self-discipline and to remain diligent in their spiritual cultivation.

Throughout history, there have been many commentaries on the Sutra of the Buddha’s Bequeathed Teachings, but Master Cheng Yen most often refers to the work of Master Ou Yi from the Ming Dynasty, titled, “A Guide to the Sutra of the Bequeathed Teachings.” In teaching this sutra, Master also included stories from the Buddhist sutras, commentary on modern day issues, and stories of Tzu Chi volunteers to help explain and illustrate the profound principles of the sutra; in this way, her audience would be able to better understand its meaning.

Master first taught the Sutra of the Buddha’s Bequeathed Teachings at a Tzu Chi Commissioners’ Gathering in January, 1986. After that, she taught it once a month, using the sutra passages to teach Tzu Chi volunteers how Tzu Chi’s missions attest to the meanings and principles of the Buddhist sutras. She encouraged everyone to apply the Buddha Dharma in their daily living, to become Living Bodhisattvas in this world, to diligently cultivate precepts, Samadhi, and wisdom, and to eliminate greed, anger, and ignorance. Master gave a second series of teachings on this sutra in 1989. This publication draws from both the series of teachings on this sutra. 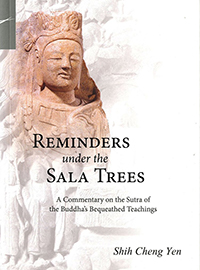 Reminders under the Sala Trees: A Commentary on the Sutra of the Buddha’s Bequeathed Teachings

The Sutra of the Buddha’s Bequeathed Teachings was translated to Chinese by Tripitaka Master Kumarajiva from Kucha.

The content describes the Buddha’s instructions to his disciples before he entered Parinirvana. After the Buddha entered Parinirvana, his disciples were to regard the precepts as their teacher in order to safeguard the Five Roots and distance themselves from anger, arrogance, and so on. Thus, he encouraged everyone to have self-discipline and to be diligent in their spiritual cultivation.

This explanation is based on the Sutra of the Buddha’s Bequeathed Teachings in the Taisho Tripitaka. Because some of the vocabulary differs from the original text, we followed the words used in Master Cheng Yen’s teachings. Furthermore, to clarify the meanings and principles, some sentences have been rephrased to fit with a modern reading style.

Throughout history, there have been many commentaries on the Sutra of the Buddha’s Bequeathed Teachings. In her teachings, Master Cheng Yen often referred to the work of Master Ou Yi from the Ming Dynasty, “A Guide to the Sutra of the Bequeathed Teachings” (denoted as “Guide to the Sutra” in this book to distinguish the sutra text and explanations). She also included stories from the Buddhist sutras, commentary on modern day issues, and stories of Tzu Chi volunteers to help explain and illustrate the sutra’s profound principles. This helped people better understand the meaning of the sutra.

Master taught the Sutra of the Buddha’s Bequeathed Teachings twice. In January 1986, Master taught this sutra for the first time at the Tzu Chi Commissioners’ Gathering. She taught it once a month after that, using the sutra passages to teach volunteers that Tzu Chi’s missions are the path to practicing the sutra and that they attest to the meanings and principles of the Buddhist sutras. She encouraged everyone to integrate the Buddha Dharma in daily life and become Living Bodhisattvas in this world, to diligently cultivate precepts, Samadhi, and wisdom, and to eliminate greed, anger, and ignorance.

This series of teachings ended after two and a half years, in July 1988.

Additionally, based on the archived recordings, Master also taught the Sutra of the Buddha’s Bequeathed Teachings in 1989, also beginning with the preface. Unfortunately, the exact timing and detailed audience could not be identified. However, from this, we were able to infer that Master taught the Sutra of the Buddha’s Bequeathed Teachings twice. It was not easy to preserve tape recordings from the early days, and with limited manpower and material resources, as well as insufficient space at the Jing Si Abode, it has been difficult to find all the recorded material.

This compilation is based on the recordings from both times that Master taught the Sutra of the Buddha’s Bequeathed Teachings. We followed the flow of the sutra passages, smoothed out the manuscript, and held test-readings. Finally, we compiled the teachings into a total of twenty-one chapters.

Each chapter begins with Buddha’s earnest reminder, “Bhiksus…” However, in the ninth chapter, there is a passage which says, “Bhiksus, you should touch your heads, for you have already given up your adornments. You wear the kasaya, and with bowl in hand, you beg to support yourselves; you must view yourselves as such. If arrogance arises in you, you must quickly eliminate it. Arrogance is not suitable even for those in white clothing (lay people), to say nothing of those who have left lay life to enter the Path. To be liberated, humble yourselves through begging.” After a thorough search, the recording of the teachings on this passage could not be found. We kept this sutra passage, but we were unable to include Master’s explanation of this sutra passage.

From Chapters 1 through 4, up until the passage, “Therefore, you must know that the precepts are the safest and most stable place where merits and virtues abide,” and the second section of Chapter 16, the commentary was compiled from the transcripts of Master’s teachings from 1989. The audience of this teaching were the residents of the Jing Si Abode. Based on the sutra passages of the Sutra of the Buddha’s Bequeathed Teachings, Master explained the importance of upholding the pure precepts and virtuous Dharma in spiritual cultivation.

What is worth mentioning is that the commentary from Chapter 5 to the first section of Chapter 16, (to the passage, “Those who do not accomplish this are not practitioners of the Path, nor are they laymen clad in white; there is no name for them,”) and from Chapter 17 to 21, (to the passage, “You must stop now and say no more. I am waiting for the time to pass; I wish to cross into extinction. These are my final teachings,”) was taken from the transcripts of Master’s teachings during the Commissioners’ Gatherings in 1986.

The audience at that time were the Tzu Chi commissioners who returned to the Jing Si Abode every month to participate in the meeting. At that time, Tzu Chi had been established for twenty years, and it was a time when Tzu Chi’s Four Missions were beginning to develop. The analogies Master drew from the sutra gave the general public a deeper understanding of Tzu Chi.

The Sutra of the Buddha’s Bequeathed Teachings contains the Buddha’s earnest instructions to the bhiksus before entering Parinirvana. Master spent a lot of time explaining the word “bhiksu,” which carries the meanings of “demon-scarer,” “almsman,” and “evil-ender.” When it comes to the meaning “demon-scarer,” Master encouraged everyone to review her previous teachings to gain new insights and mindfully seek to understand what she taught about “subduing the ten armies of Mara.” “Armies of Mara” refers to the ten obstructions to cultivating the path to Buddhahood. With their powerful ability to take lives, disrupt, and obstruct people from doing good deeds, they are called “the armies of Mara.” Based on the ten armies as described in the Treatise on the Great Prajnaparamita, Master explains the ten methods to vanquish them.

Before Master taught the Sutra of the Buddha’s Bequeathed Teachings, from January 18 to January 26, 1986, Master used the Wisdom at Dawn Dharma talks during these nine days to teach lay and monastic disciples from the Jing Si Abode and Tzu Chi staff about subduing the ten armies of Mara. In this compilation, we specifically added this section as an appendix.

By compiling both series of her teachings into one, readers are further able to see Master’s hard work to establish and develop Tzu Chi’s missions and the effort she expended to spread the Buddha Dharma during the late 1970s.

The simple analogies in the book further attest to the relevance of the teachings of the Jing Si Dharma Lineage and the footprints of the Tzu Chi School of Buddhism. When she taught the Sutra of the Buddha’s Bequeathed Teachings, Master further said, “This sutra is not only for monastics to listen to; even lay practitioners should accept and uphold this.”

The entire book was compiled using the original recordings and transcripts to represent the content in its truest, most complete form.

The original Chinese publication of this book was made possible by the Jing Si Abode’s monastic practitioners, Pure Practitioners, Tzu Chi volunteers, and others. A total of more than 220 participants helped to transcribe, proofread, and compile the content from the original audio recordings.

For the Chinese version, designer Chen Jun-Liang’s team from Freeimage Design helped with the cover and proposed a text layout where each verse can inspire silent contemplation and each paragraph can stand on its own, while together they form an entire chapter. This design allows the Buddhist sutra to suit modern Chinese reading habits and to be more deeply integrated into our contemplation of daily living. [1]