Teachings and Commentary on the Thirty-Seven Practices to Enlightenment

Master Cheng Yen gave two series of Dharma talks on this teaching. In 1987, she gave a total of forty-eight Dharma talks on this teaching in order to convey the essence of spiritual cultivation to both her lay and monastic disciples. Master began to explain the sequence of spiritual practice, analyzing and explaining each part, and delving deeply into the principles of the Buddha Dharma. She did this so that listeners could engage in deep contemplation and then widely put the teachings into practice. The second time she expounded this teaching was in the year 2000, during the Lunar New Year. Her hope in giving this teaching during that time was that, amidst celebrating the new millennium, everyone could adjust their minds and bodies. At that time, Master skillfully used stories from the Buddhist sutras as analogies to explain each of the thirty-seven practices. In this way, everyone could imagine the situation and deeply remember the essence of each one. This publication is largely based on Master Cheng Yen’s teachings from 1987, combined with passages from Buddhist stories she taught in 2000, which emphasize the meanings, principles, and perspectives from her two rounds of teaching. 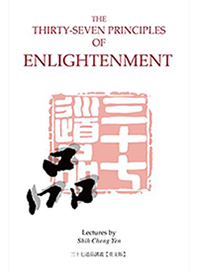 The Thirty-Seven Principles of Enlightenment 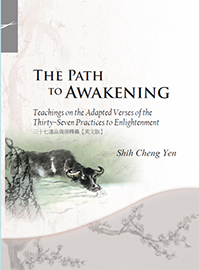 The Path to Awakening: Teachings on the Adapted Verses of the Thirty-Seven Practices to Enlightenment

The Thirty-Seven Practices to Enlightenment is not a sutra. It describes the sequence of spiritual practice in the Buddhist teachings. These are methods to be practiced on the path toward liberation and the attainment of awakening. In total, there are thirty-seven of these essential practices.

The Thirty-Seven Practices to Enlightenment are foundational and essential practices for helping us in our spiritual cultivation. They are an important provision on our spiritual journey; this is a teaching that is taught by all buddhas.

These practices are derived from the Agama Sutra, the Mahavibhasa Sutra, the Verses on the Treasury of Abhidharma, the Treatise on the Great Wisdom Perfection, and other great discourses. When Mahayana Buddhism was first established, these practices were seen as the first steps in learning the Buddha Dharma.

The first time she gave this teaching was from July 10 to October 10, 1987. Over the course of forty-eight Wisdom at Dawn Dharma talks at the Abode, she taught both lay and monastic disciples the essence of spiritual cultivation. Master began to explain the sequence of spiritual practice, analyzing and explaining each step, and delving deeply into the principles of the Buddha Dharma. She did this so that her audience could engage in deep contemplation and then widely put the teachings into practice.

In her teachings, Master first used the Three Principles and Four States to explain the laws of nature of this world. The Three Principles of this world refer to the workings of life, of the mind, and of material objects. For each of these, the Buddha Dharma also describes Four States, which are birth, aging, illness, and death; arising, abiding, changing, and ceasing; and formation, existence, decay, and disappearance. By presenting these principles and states in combination, Master completely analyzed their essence in order to explain how we can always maintain the bodhisattva spirit, even in the face of change.

Although this formulation differs from the descriptions in many Buddhist reference materials, Master’s explanations go directly to the heart of life itself. Thus, her teachings have become popular and familiar among Tzu Chi volunteers. Her series of talks was compiled and circulated in June 1990 by Tzu Chi Cultural Pub. Co., under the title The Thirty-Seven Principles of Enlightenment – Lectures by Shih Cheng Yen. The hope is that those who have the affinity to read it will be able to get a glimpse of the practices of the Buddha Dharma.

The second round of teachings took place from February 18 to February 28, 2000. This was after the Lunar New Year, so Master hoped that amidst the celebration of the new millennium, everyone could adjust their bodies and our minds. Therefore, for ten days during the Wisdom at Dawn Dharma talk, Master once again concisely explained the Thirty-Seven Practices to Enlightenment.

The time was too short to fully expound the principles. Thus, Master made these profound truths easy to understand by skillfully using stories from the Buddhist sutras as analogies to explain each practice. In this way, everyone could put themselves into the different situations and vividly remember the essence of these principles. Her teachings this time, which totaled around 25,000 Chinese characters in length, were not compiled into writing.

At the end of 1999, based on his realizations from reading The Thirty-Seven Principles of Enlightenment, Mr. Kuo Meng-yung extracted lyrics from the book and composed music, creating the Adapted Verses of the Thirty-Seven Practices to Enlightenment. During the year-end blessing ceremonies that year, the Jing Si Sign Language Team followed Master Cheng Yen on her travels, performing all across Taiwan. This was the first time that Tzu Chi used a sign language performance to present the teachings. With beautiful melodies, concise lyrics, and the sign language gestures, this performance suited the tastes of the current generation, which are “to listen with the ears, see with the eyes, and contemplate with the mind.” Not only was this performance able to broadly spread the meanings and principles of this teaching, it has also become group study material for Tzu Chi offices around the world.

In May 2005, as the music and sign language performances continued to spread, Tzu Chi Cultural Pub. Co. compiled a new book called Teachings on the Adapted Verses of Thirty-Seven Practices to Enlightenment.

This current compilation is based largely on Master’s teachings on the Thirty-Seven Practices to Enlightenment in 1987. We combined it with passages from Buddhist stories from her teachings in 2000, which emphasized the meanings, principles, and perspectives from her two rounds of teaching. Then, we copy-edited the content, applying the principle of maintaining Master Cheng Yen’s intent and tone to our editing work.

Although it is just one more character, there is an emphasis on urgency and compassion. So, when this manuscript was compiled, we used Master’s words from her lectures. Whenever Master’s choice of terms differs from the most common source texts, the manuscript remains faithful to Master’s words.

When expounding the Fourfold Mindfulness, the Four Right Efforts, and the Four Bases of Fulfilling Power, Master gave concise and original teachings, creating her own style and format. When it came to the Five Roots, Five Powers, Seven Factors of Enlightenment, and the Eightfold Noble Path, she made use of the traditional explanations from the San Zang Fa Shu (Numerical Teachings of the Tripitaka) to help everyone understand the explanation of these teachings. This is why we included the original passages from the San Zang Fa Shu at the beginning of those chapters.

Tzu Chi shares a deep connection with the Thirty-Seven Practices to Enlightenment. The Tzu Chi logo has flower petals on both sides, eight altogether, which represent how Tzu Chi volunteers are always practicing the Eightfold Noble Path. They also represent the Four Missions and the Eight Footprints. The Eightfold Noble Path of renouncing evil is the direction in which Tzu Chi volunteers advance.

Master has been consistent in her compassion and vows to promote integrating the Buddha Dharma in daily life and becoming Living Bodhisattvas in this world. When it comes to the sequence and method of spiritual cultivation, she constantly encourages people with loving words. She encourages them to take the Dharma to heart, and moreover, to put the teachings into practice. With the Four Infinite Minds of loving-kindness, great compassion, great joy, and great equanimity, when we cultivate blessings, we must also simultaneously cultivate wisdom, and vice versa; our cultivation of blessings and wisdom must be equal.

Tzu Chi teachings strongly emphasize diligent practice. With blessings, we will have affinities with sentient beings. With wisdom, we are able to lead sentient beings. Master’s teachings delve deeply into the Buddha Dharma, while using simple worldly matters as examples. Thus, her teachings are truly a testament to the times; she has written a history of this world, while establishing a sutra treasury for Tzu Chi.

The original Chinese publication of this book was made possible by the Jing Si Abode’s monastic practitioners, Pure Practitioners, Tzu Chi volunteers, and others. A total of more than 140 participants helped to transcribe, proofread, and compile the content from the original audio recordings.

For the Chinese version, designer Chen Jun-Liang’s team from Freeimage Design helped with the cover and proposed a text layout where each verse can inspire silent contemplation and each paragraph can stand on its own, while together they form an entire chapter. This design allows the Buddhist sutra to suit modern Chinese reading habits and to be more deeply integrated into our contemplation of daily living. [1] 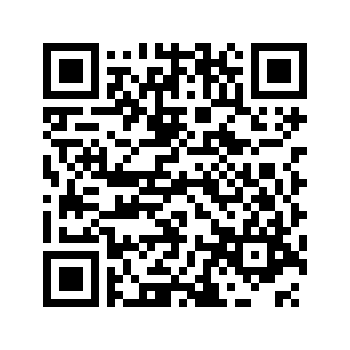